Minecraft Building Tips: Leads! Leads are a great functional item in Minecraft, but also are an amazing feature in buildings and add unexpected details to builds. In this article I will show you tips for how to use leads to enhance your builds in Minecraft!

Leads, or leashes, are the closest thing Minecraft has to ropes. In Java Edition, they are only able to be attached to certain mobs and fences. In Bedrock Edition, you can also attach leads to boats.

Examples of Builds with Leads

By hiding a passive mob, you can attach one end of a lead to a build to add detail to your builds. In this example, leads create a hanging chandelier.

Here leads are used to make stakes to support this hanging bridge.

The trick to using leads is they have a limit on how long they stretch. Make sure the lead doesn’t need to span a large distance (only a few blocks max).

Typically, it’s best to hide the mob that is attached to the end of the lead. When doing so, don’t allow a lot of room for the mob or else the lead will move around, unless that is part of the look you want!

Minecraft building tips for leads aren’t just about the visuals. Consider that most mobs make noises! The best way to avoid this is to use rabbits or snowmen. Both are silent mobs. Snowmen great because they are constructed in place wherever you need one. The downside to them is they take up a lot of space. 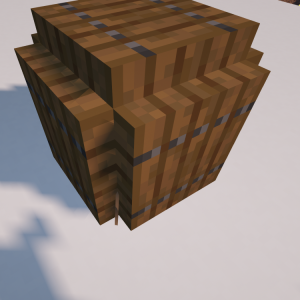 A Rabbit Trapped in a box to be used with a lead in a build.

Rabbits are great because they only take up 1 block of space. However, they can be hard to find at times and hard to wrangle into the hole when playing Vanilla. 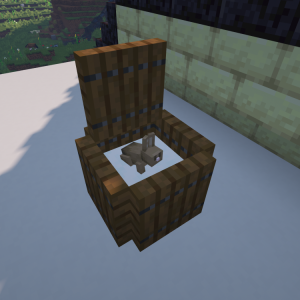 Rabbit on Snow to use in conjunction with a build

If using either of those mobs, layering some snow on the block that the mob stands on will confine the space so the mob cannot move. This will make the lead completely steady and not move around.

Leads provide curves and realism to builds that few other items in Minecraft can provide. Be creative and have fun! For more Minecraft building tips and decoration ideas, check out this great tutorial on 10 Easy Minecraft Lighting Ideas!