There are several enchantments you’ll be putting on every piece of armor so we’ll cover those first before delving into the enchantments for specific pieces of your armor set.

Unbreaking is a little unnecessary as the Advanced Mending will keep it as essentially 100% all of the time. Might as well throw it on there though…

These are actually the same as vanilla, other than the fact that you will be getting advanced variants for the general enchantments as above.

Inner Berserk will increase damage the lower your health is. This makes these two enchantments pretty powerful together although with Advanced Protection you won’t get hurt too much.

I would NOT get Evasion unless you can manipulate the config on the server/ world you are playing on. By default the Evasion enchantment will force you to do a directional jump when it procs. This can be turned off in config but if you can’t do that it’s incredibly annoying.

Agility is a great enchantment that increases your movement speed.

The feet have the most new enchantments and with all of them combined fall damage will become a thing of the past! 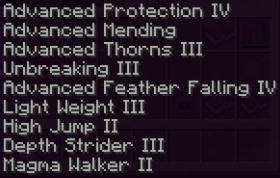 Light Weight will both reduce fall damage and increase the distance you need to fall before fall damage will occur.

Magma Walker is more optional and comes down to preference. It can be very useful as it allows you to walk on lava and take no damage. However as there are items like the Dragon’s Eye that make you immune to lava you might not want to pick this up.

Now that you know how to get the best enchantments for your armor. You need an awesome set of armor to put them on! Golem Armor is the best armor in the RLCraft modpack and you can learn how to get Golem Armor here.