Mojang recently release a new Snapshot (Minecraft 1.17 Snapshot 20w48a) for the upcoming Caves and Cliffs update. . The 1.17 release slated to hit us sometime in 2021. We got 1.16 in April of 2020 so lets hope we get 1.17 that early but regardless, Mojang has been teasing us with lovely snapshots of what we might expect and the latest incarnation is showing us something that I think many of us have only dreamed about in the game.

Snapshot 20w48a has a few interesting new items but this article is going to focus completely on Dripstone. This is a curious item for a couple of reasons. The dripstone resembles a cave anomaly known as a Stalactite. Yes it is an amazing stone that forms long cones from the ceiling and from the floor. Mojang is giving us this in the form of dripstone but they are giving us some interesting capabilities to accommodate it. Dripstone comes in a couple different forms. We have the basic Dripstone block and then we have the spikes!  Of course, none of these features or the way they interact  with each other in the game are guaranteed to be in the official release. Snapshot features are always subject to change by final release (and sometimes even after). 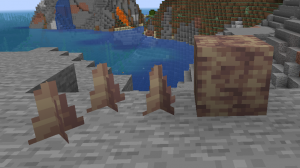 Interesting Fact #1: First off, sadly you are not going to be able to find any naturally occurring Dripstone in the snapshot. If you want to take it for a test drive you will have to go into creative and pull it out of the items menu.

Interesting Fact #2: Dripstone Drips!  This curious new block gets its name from the very obvious capability which is that the stone drips. It actually secretes water. Could this be used to farm water and would you be able to use it in the nether? Seasoned Minecraft players know that you can’t use water in the nether except within a cauldron and even then it’s limited. Currently however, the water dripping from the stone in the snapshot cannot be collected although Mojang has listed this as a capability.

Interesting fact #3: ENDLESS SOURCE OF LAVA! This might be the most interesting fact. Mojang has made it so that placing lava above the Dripstone block will allow lava to drip slowly from the spikes and can be collected in a cauldron. There has never before been a renewable source of Lava in Minecraft so this could potentially be the very first time we are able to make Lava farms!

Interesting Fact #4: These spikes can be placed upside down or right-side up. The spikes themselves do not need to be placed directly on dripstone blocks but I don’t know if that will be a feature which will stay. I suspect however that the pointed forms of Dripstones will be naturally occurring on the Dripstone block making me wonder if Dripstone farms will be a thing in future Minecraft!

Interesting Fact #5: Dripstone spikes can be places above and below the Dripstone block! This allows us to create all kinds of interesting contraptions and interior design. Let your imagination go wild! 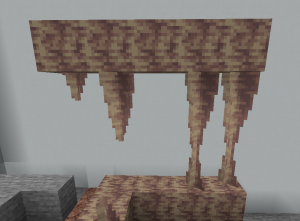 Interesting fact #6:  The Dripstone Spikes cause damage! This stone will cause anyone who falls on these spikes to take some damage. Falling from just 6 blocks above onto the spikes kills an unarmored player and mob! This gives the block a unique feature. We can use it in farms to kill mob and likewise even use it as spikes around a base! Finally something interesting that isn’t cactus, lava, fire or magma for us to line our bases with to protect from mobs or other players in the pvp setting. Interestingly, you can also knock the spikes off the Dripstone blocks and they obey gravity!  They will actually fall whole and can cause damage to whomever they land on!

Interesting fact #7 : The blocks can be waterlogged! Yes you can use this for underwater designs!

Interesting fact number #8: You can make walls!  Yes you can merger the spikes to make full long columns making this very interesting for interior design!

Interesting fact number#9: You don’t need a silk touch pickaxe to harvest Dripstone spikes. This means that even with a wooden pickaxe at the beginning of the game, you can grab these babies and make stuff!

Interesting Fact number #10: You can continue to place the spike blocks on top of each other to grow the spikes very tall! This currently is a feature that appears to have more potential in aesthetic design,  as there is no change to the amount of fall damage taken by the player of mob even if the spike you fall on is very tall. 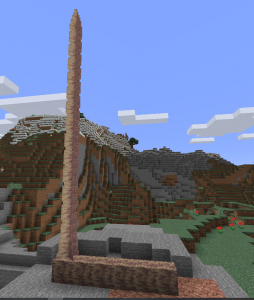 So why not try jumping on the Minecraft 1.17 Snapshot 20w48a and try 0ut some of my interesting facts!

Author thefrogqueen
NoobForce is a group of gamers who enjoy playing games and sharing their content with their community.
Connect With Us
Comments
NoobForce Live
Share This
Recent Posts
Copyright © Noob Force 2020 | Privacy Policy