Coming in Early Access to the Steam Store on November 3rd, Kingdoms Reborn is a brand new indie civilization simulation and strategy game from developers Earthshine.

In Kingdoms Reborn you will lead a group of settlers into the wilderness and strive to build a bustling and successful empire. The game features some challenging resource management, an in depth tech-tree to delve into and even a multiplayer option.

Unlike the games it is inspired by, Kingdoms Reborn also features a unique card based system more reminiscent of a tabletop game. There are three themes of cards available in the game; building, policy and interaction cards, with more becoming available as you progress.

Citizen management is a large part of game play, making sure to provide enough food, medicine and entertainment can be challenging as your

population expands. You can use specialized buildings and cards to add to your population as well as slowly tempting people in from nearby civilizations. 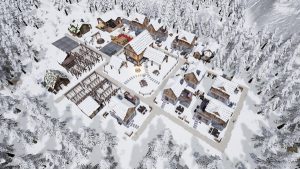 There are seven distinct biomes in the game with varied environments, resources, flora and fauna. Upon starting the game you will choose an area of the map to settle, the map is extensive and will include other settlements. Local tribes may join your population if you expand into their territory. Different areas provide varied raw materials, so choosing an area with good resource availability is crucial.

There is a market economy in the game where you can build trading posts and markets. The prices can be influenced by your game play through cards, specialized buildings and diplomacy.

Unlike games like Banished there is multiplayer in Kingdoms Reborn, even in early access. You can each choose an area to settle in the open world. You can choose to be allies and trade and aid each other or fight it out by stealing gold and citizens. 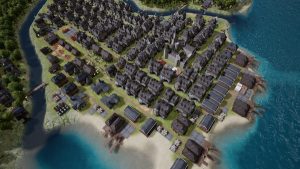 I started the game with no knowledge of the mechanics or any real idea what I was doing, although I have played a lot of city building games in the past. I chose a temperate climate and an area with grape growing to begin with, figuring food would be important. Iron, coal and cotton were also nearby so it seemed like a good bet.

There is a good tutorial to guide you through the first few steps of the game which was very helpful. I focused on food first, then housing, trade, industry as my civilization grew. Once my population tipped over 100 the food started to run low, thankfully the economy was thriving so I traded gold for food and waited for it to arrive. Unfortunately I was too late and my citizens started to starve or abandon the village. By the time food arrived the population dropped to around 50 and I decided I really needed to up my food production before it grew again.

I built more farms, more hunting lodges and upgraded food production where I could. I used cards and expanded into native villages to rebuild the population. The population started to grow, the city was rebuilding and I felt safe but I had forgotten disease. When the sickness came I wasn’t prepared, again I tried to use trade to bring in more medicine, again my population level fell as people died and again I rebuilt this time focusing on medicinal herb production. This seemed to be the way most games went as my population grew I would usually end up with starvation or disease spiraling out of control and having to start over. But I did start over because the game kept drawing me back, I was trying to beat it and having a great time doing so. 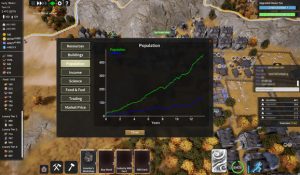 So how has the game been received in the days since its release? Its current rating on the Steam Store is “Very Positive” and it’s easy to see why. For a game made by a solo developer which is in early access it is extremely polished. The developer responds quickly to any criticism with solutions or apologies and looks to be active and passionate about their game and its development. Most reviews liken the game to Anno or Banished, in some cases stating its features even expanding on the latter. I myself enjoyed the game, will continue to play it and believe it is worth the price tag.

In my opinion and that of many on Steam, Kingdoms Reborn is definitely worth a purchase even in its current early access form. If you are looking to scratch that civilization management itch then there is definitely plenty to get your teeth stuck into. Yes it has areas to improve particularly the AI and multiplayer features all of which I’m sure the dedicated developer will continue to work on. Overall I believe Kingdoms Reborn is a great game and I will be returning to the game soon to try and expand my city further and discover what else it has to offer in the future.